Even if you’re a world class striker, with knockout power in both hands, I would still argue that it’s absolutely critical to also master a few reliable chokes from different positions!

A properly applied choke can render even a big guy unconscious in about 10 seconds – it’s that powerful.

And, contrary to what you might think, a choke is actually much safer than a left hook, right cross, flying knee to the face or simply beating them into oblivion.

That’s because the odds of him falling, fracturing his skull on the pavement and dying are much less after a choke than the big Sunday punch (people can and have gone to jail for many years after such a pavement-induced fatality).

And that’s where chokes come in.

There are TWO general kinds of chokes: blood chokes and air chokes. But they’re not created equal.  One style of choking is much faster, more powerful, and – paradoxically – also safer for your opponent.

Let’s take a look at both types of chokes…

A ‘blood choke’ (referred to as a ‘strangle’ by some people) is the gold standard for chokes.

In a blood choke you attack the sides of the neck!

This pressure on the side of the neck compresses the arteries and veins that circulate blood to and from the brain, causing your target to black out.

Properly applied a blood choke can knock someone out in about 10 seconds, and sometimes even less. This is usually a relatively painless procedure, so when adrenaline is flowing your opponent may not even realise that he’s been fully checkmated until it’s too late and he slumps unconscious.

The good news from both a legal and training partner point of view is it’s a reasonably safe choke — at least compared to knocking someone out with a punch — and assuming you release it in time and don’t leave your opponent lying flat on his back where he could choke on his tongue.

Once you release the choke the other guy almost always wakes back up again, not too much worse for the wear.  By which time hopefully you have made your escape and are long gone.

In an air choke you attack the front of the neck, applying pressure to the relatively delicate trachea area.

The pressure to the front of the throat makes it impossible to breath, which will eventually result in him becoming unconscious.

Air chokes are also usually much more painful that the blood choke variety, so they cause a training partner to tap out really fast in a sparring situation.

But in a real fight, when people’s pain tolerances are through the roof, air chokes take longer than blood chokes to knock someone out. After all, most people can hold their breath for at least 30 to 60 seconds before they go unconscious.

Both styles of choke definitely work.  But given the potential legal implications of an air choke gone bad I would definitely go for a blood choke in a self defense situation given the choice.

Try out both kinds of choke, and then, should you ever use an arm drag to get to someone’s back and choke them out you can make an intelligent decision about how exactly you’re going to choke them out!!! 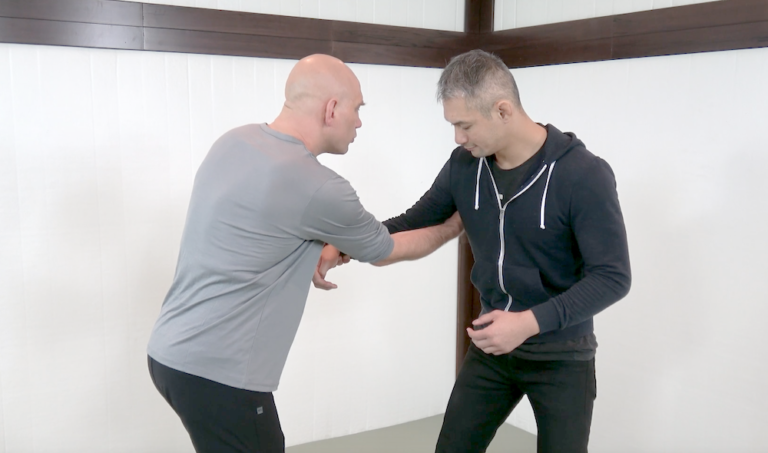 If you’re interested in learning more about how to apply chokes that come on instantly then check out The Submission Formula featuring Rob Biernacki  at grapplearts.com/submissionformula. It’s available in DVD and instant access streaming format.

Not only will it help your chokes, it’s guaranteed to make your armlocks and leglocks MUCH more powerful too.

And I mean that ‘guaranteed’ part literally – if you don’t like what you get then you’re protected by the 100% moneyback guarantee anytime in the first 365 days!